No dive site is quite the same on two successive dives!

To the North is 'The Gut', this is the channel between Thatcher Rock and the shore. Subject to strong currents and heavy boat traffic. In places very dramatic with large rocks & crannies. Popular area for potting. Can get very shallow at low tide - keep close to Thatcher to avoid problems.

To the West and South there are small broken rocks. King Rock lies off to the South-west.

To the East the site slopes away from large rocky gullies leading on to smaller reefs. 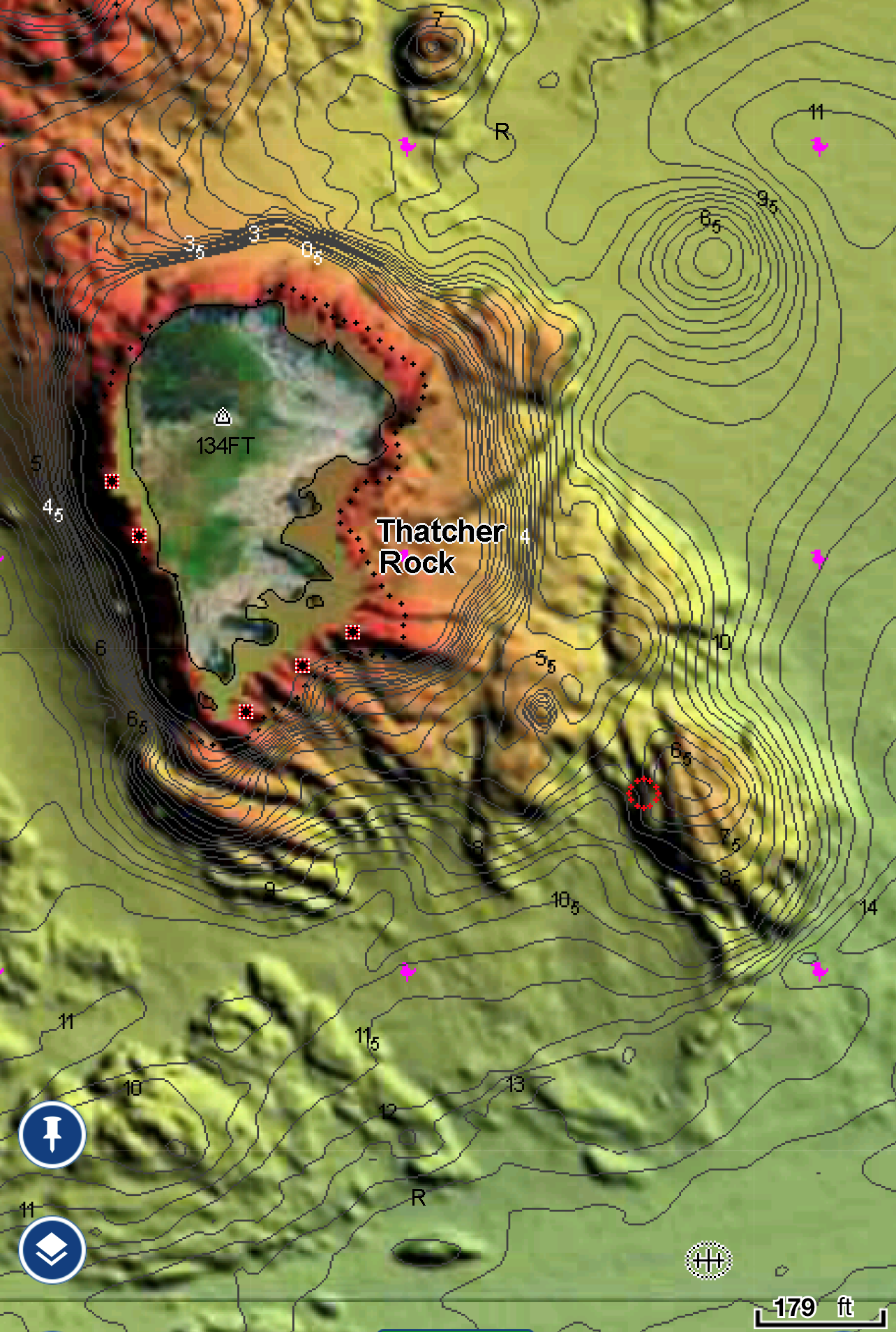 A more sandy bottom here generally means the vis will be better than the more silty areas in the Bay. However, the tidal currents can be a bit stronger than sites closer to shore. The Sunker is a small pinnacle just to the South West of the Orestone. There is also a small swim-through tunnel on the south-west corner. 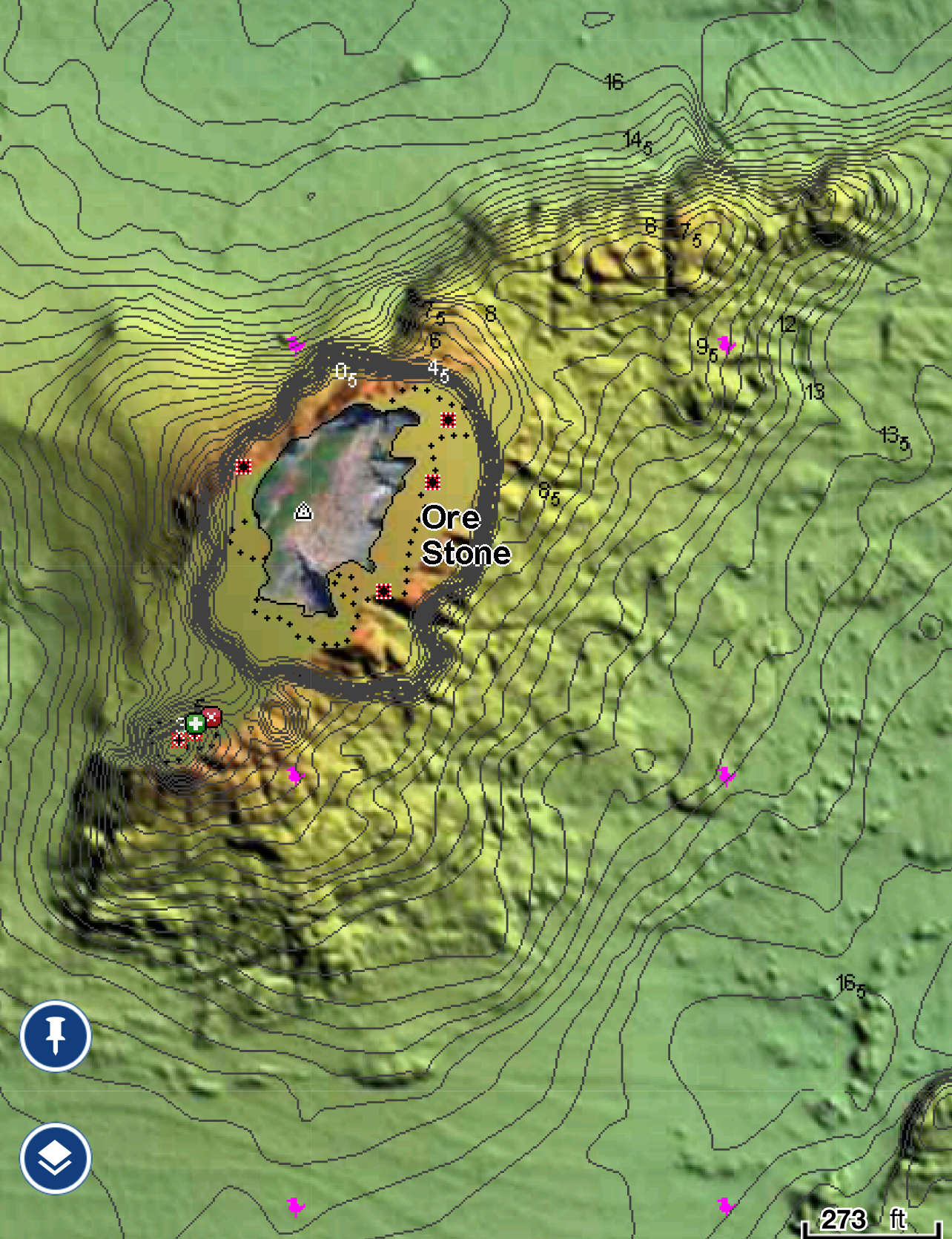 This site feature some lovely ground and an underwater 'amphitheatre' just to the East. Working along the East face of the rock is very enjoyable, but if you get taken by the current and drift towards Thatcher Rock, you will find yourself on an extensive area of flat sand and mud. Don't give up! You will start to see good ground after this. But beware, on Spring tides you can be swept away quite quickly, so SMBs and good boat cover are essential.

Slightly deeper and further out (doesn't break the surface) - North-east of the Orestone. Visibility is generally better here, with a more sandy seabed and strong tidal flow. Good for crustaceans. A shotline is recommended to start the dive.

The Morris Rogue Reef (below)

This is a favourite site for early training, as the top is at about 6m - hence ideal for those early drills and the edges of the reef are a delight of crevices featuring a goodly selection of the local wildlife. The surrounding seabed is 10 - 12m deep, with is a sharp ridge on the South-west side. 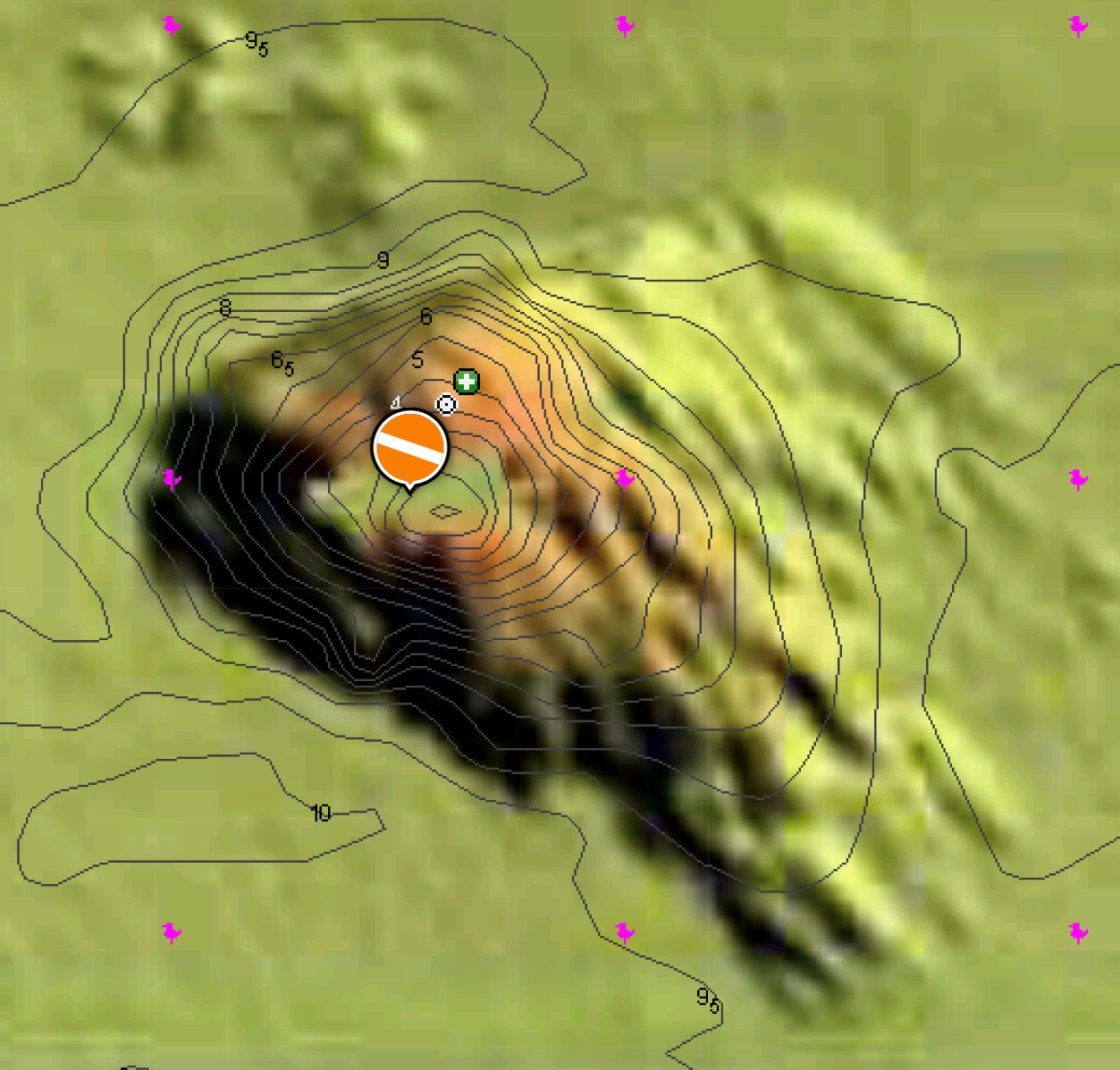 A small stack to the North-west of the Morris Rogue. Can be quite silty, especially on the west side.

This shallow area at the North of the bay, not far outside Torquay Harbour has a large collection of pipes spilled from the wreck of a barge which rests here. This is an ideal site for trainees. Ballan wrasse, conger eel and other fish life in abundance.

This shallow area just off the beach between Torquay Harbour and the Pipes is the first of the Seagrass beds. Can be dived from the shore (path behind Living Coasts), but it's a bit of a slog getting back up to the car park in full scuba kit! 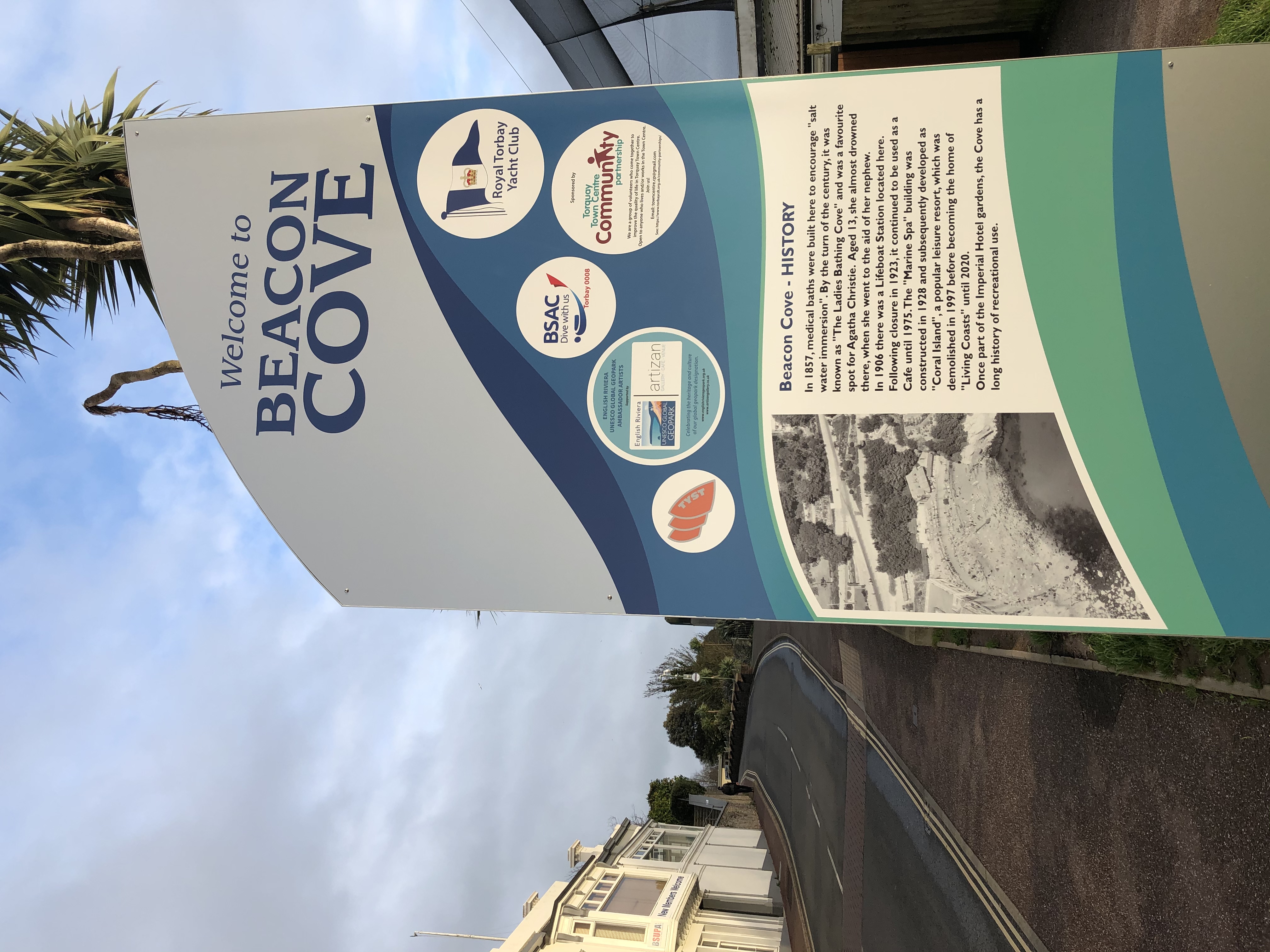 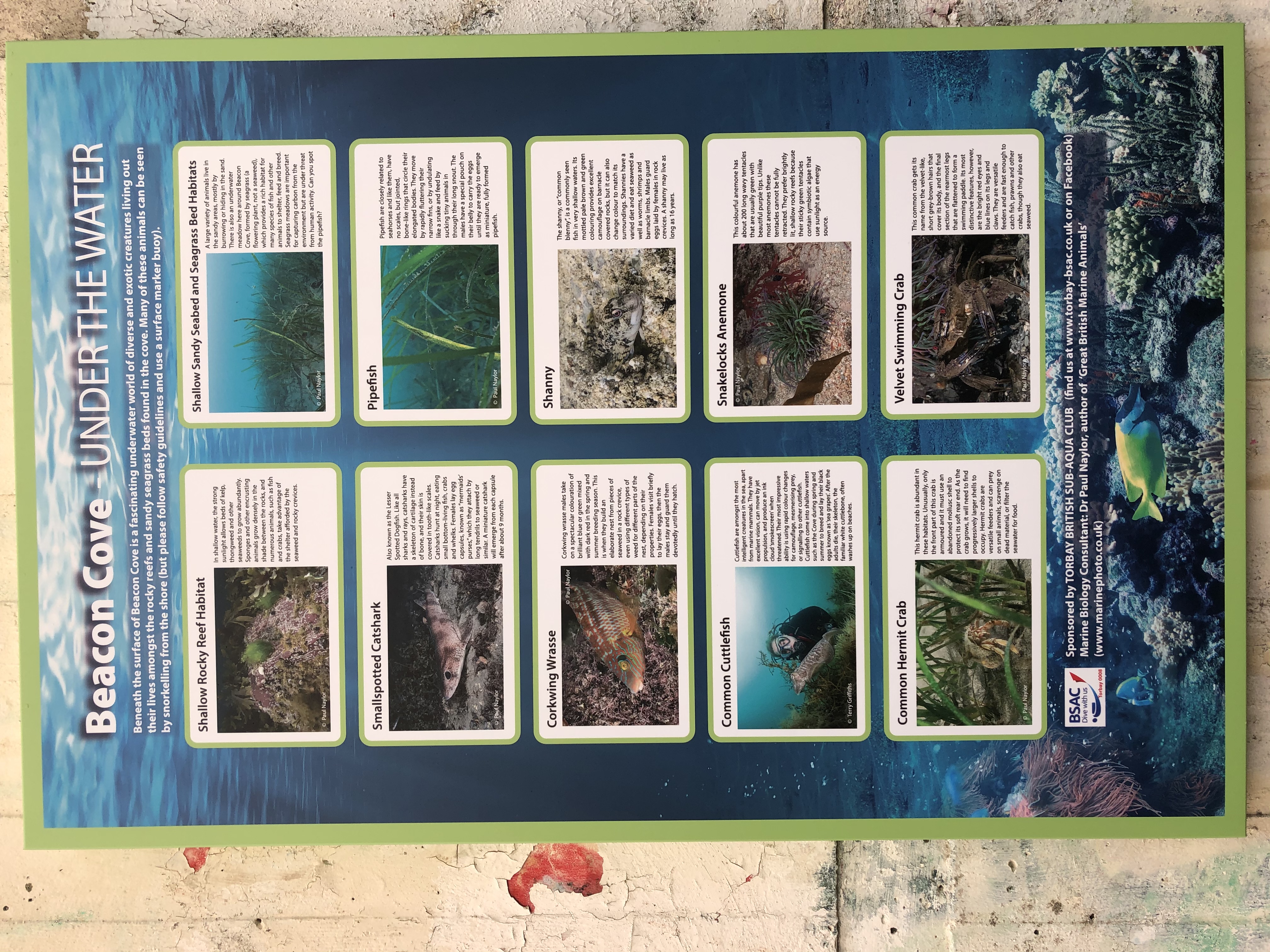 Note that the council has now installed a gate at the top of the path to the cove that will be locked at night. This is an initiative by local residents and businesses to improve the image of the cove and discourage anti-social behaviour there at night. CCTV has also been installed. During the summer months, the gate is locked at 9pm. Once you are inside, it is possible to exit by pressing a button, so if you are planning to night dive there, make sure you are inside before 9pm. (We have asked if later access is possible by arrangement, but were told that it wasn't). The gate is locked earlier outside of summer.

Cave system between Babbacombe and Teignmouth.

A reef off Broadsands beach, where once resided the remains of a Cessna - now corroded away, alas. Alive with life, look for squat lobsters adhering to the top of crevices, armoured bull-heads, butterfish and the like. Quite a nursery for small fish.

Other popular shore dives include Babbacombe Beach and Meadfoot Beach.

For further information, email us at: This email address is being protected from spambots. You need JavaScript enabled to view it.

The club meets every Wednesday, come rain or shine, 7:30 pm at Torquay Rugby club, to socialise, train and arrange dives. Come along and meet us or contact us by email (torbaybsac@aol.com).