The fifth annual Splash-in underwater photography competition run by the Torbay branch of the British Sub-Aqua Club (BSAC) took place on Saturday, 14 August. A Splash-in competition is one where the photographs must be taken on a single day, and sometimes within a certain area (in our case, Torbay). There were four categories of entry: Beginner, Compact Camera, Wide-angle, and Close-up/macro. Once a popular form of competition, they seem to have declined in recent years, and now the Torbay Splash-in is one of the few being held anywhere each year. 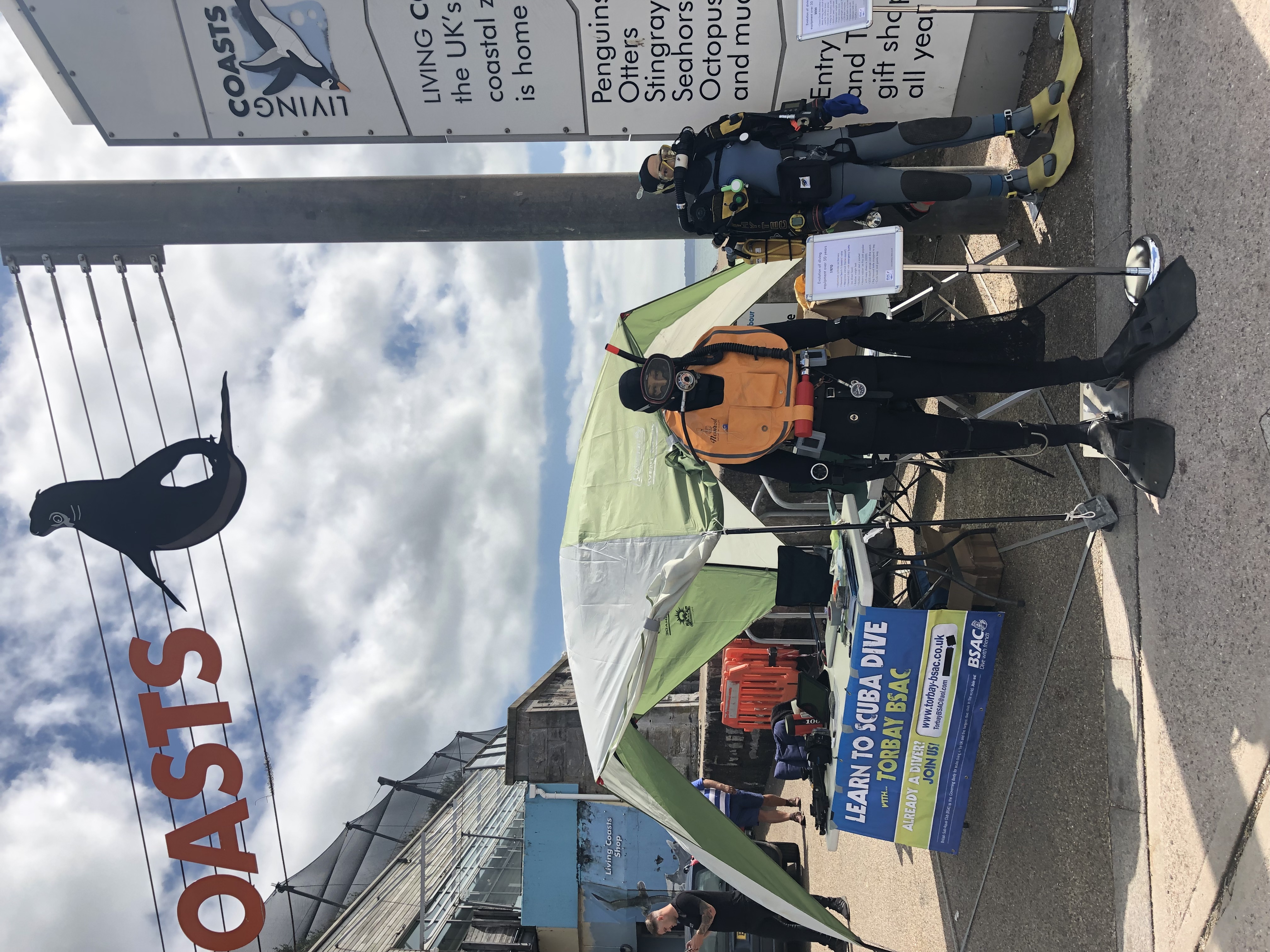 The club booth on Beacon Quay with 'history of diving equipment' models.

Poor underwater visibility in Torbay on the day presented the competitors with particularly challenging conditions, so it was encouraging to receive a total of 65 photographs, submitted by 16 competitors. As in previous years, the quality of most photographs was very high, which given the conditions on the day, testified to the skills and resourcefulness of the contestants (one enterprising contestant got a winning shot in the seawater swimming pool at Shoalstone in Brixham).

An evening dinner and presentation were held at the Royal Torbay Yacht Club, where all the photographs were shown, and a ‘Popular Vote’ held to select a “peoples’ favourite”. Judging was conducted anonymously by Peter Rowlands, the well-respected photographer and editor of Underwater Photography Magazine, who provided insightful and interesting comments on the winning photographs. 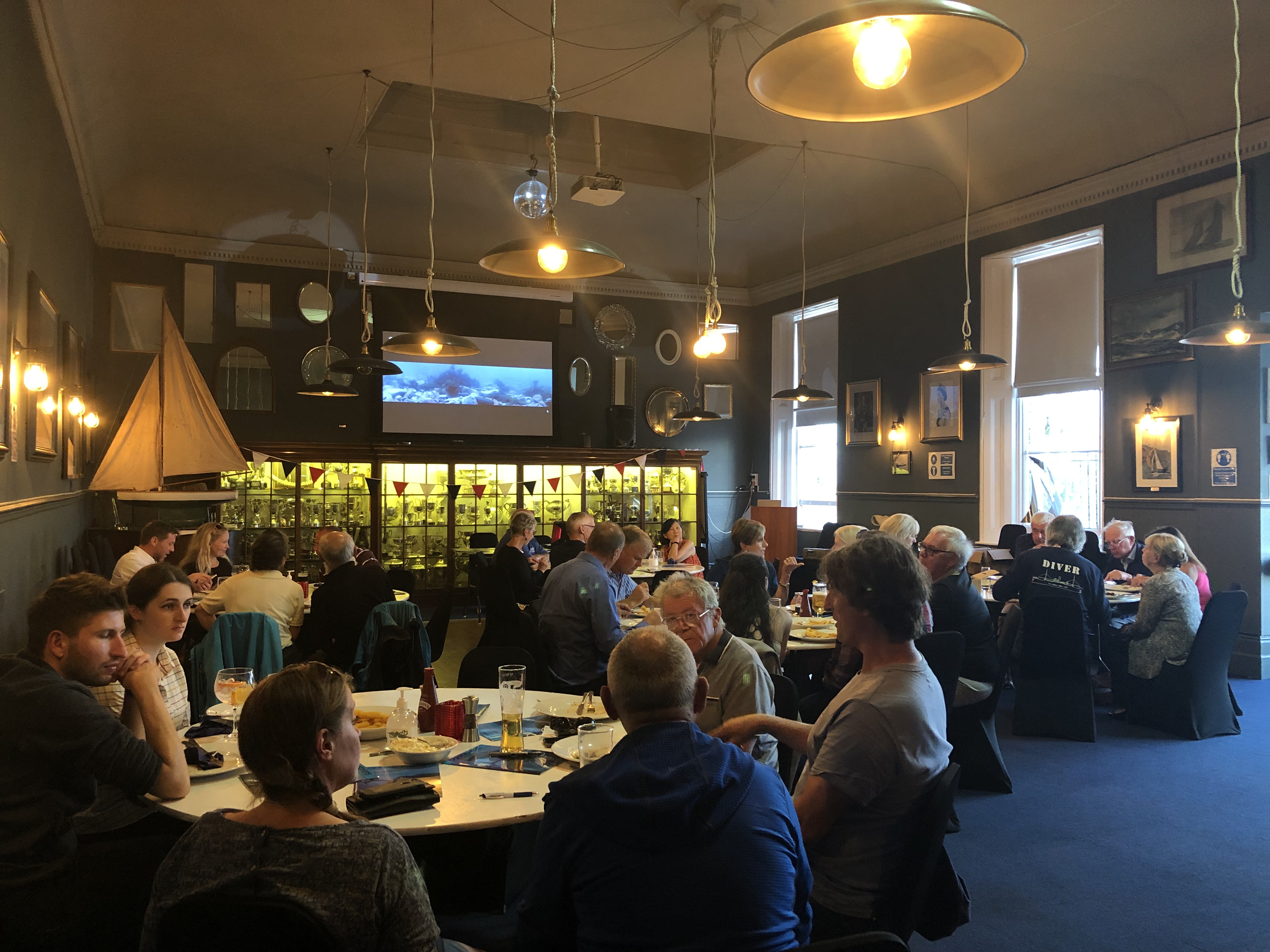 Peter Rowlands: “This one stood out, a distinctly different image because of the conditions. It’s also just a very pleasing shot. There would have been a lot of movement going on. It wasn’t a particularly sunny day, so we don’t have too much brightness and sparkle, but it’s still a nice image and it jumped out when all of the photos were on the screen together.” 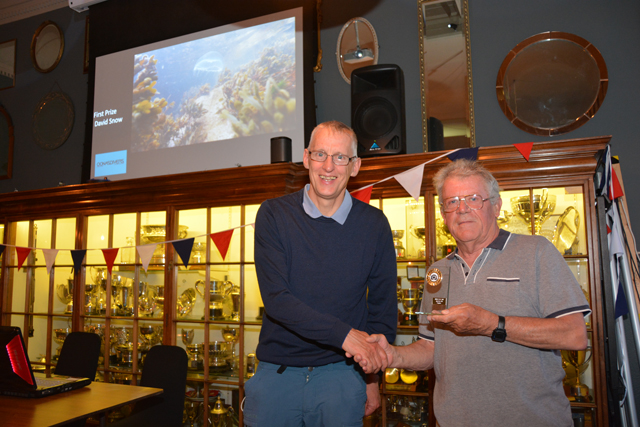 David commented: “I headed out to Thatcher Cove by kayak and then swam to Thatcher Rock at sunrise, but didn`t get any good pictures because of poor visibility. I then went out to Anstey`s Cove and swam around the rocks and pools. I followed a jellyfish for a few minutes, and I took 12 shots before I managed to take the shot that won, despite significant movement from waves coming in.” 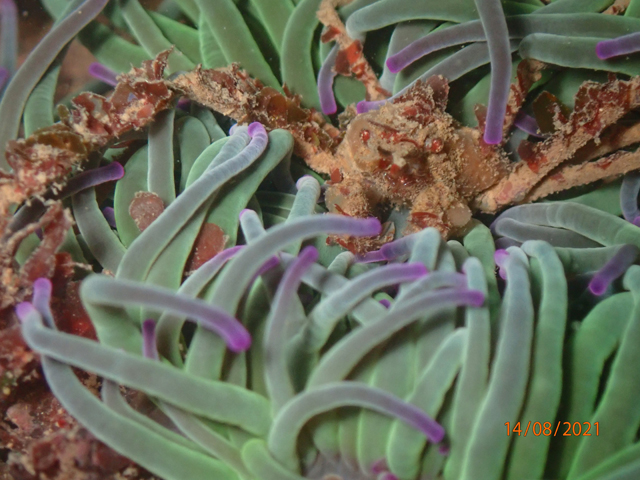 Peter Rowlands: “I particularly like this. The juxtaposition of colours, shapes; the subject is not perfectly framed, but it works in this scenario where you’ve got the chaos of the snakelocks anemone, the lovely purple tips, and the contrasting brown. It is a very nice image, a very competent image.” Peter Rowlands: “Just a very engaging portrait, a very characterful subject. The backscatter doesn’t diminish from it all, in fact it creates more atmosphere than if it wasn’t there.” 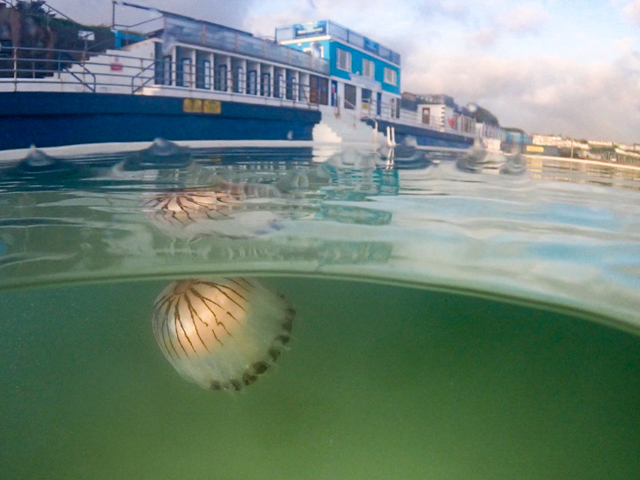 Peter Rowlands: “What can you say? A clean, visually simple image. There’s no doubt exactly what’s going on there, and compared to the other shots, it just jumps out. For competition photography, that’s what it has to do, it has to leap out, so you go back to it again and again. And this shot has so much to look at. It’s a very competent shot.” 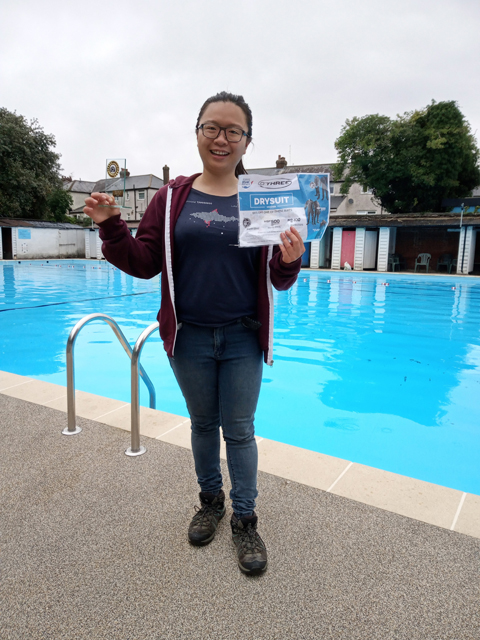 Karen Ho with her prize, including a discount voucher from O'Three

Karen commented: “The visibility around Torbay wasn't spectacular due to the torrential rain from the past few days, so on Saturday morning, I went to Shoalstone pool as this is one of the few seawater pools left in the country. Just as I was wondering how they could filter out all the marine critters, I caught sight of a small compass jellyfish floating in the shallow end. Since I still had my wet wide-angle lens on, I took this split shot of the compass jellyfish floating in the pool with the building in the background. You may have seen fishes painted on pool murals, but have you seen an actual living marine critter in a swimming pool? Now you have”. 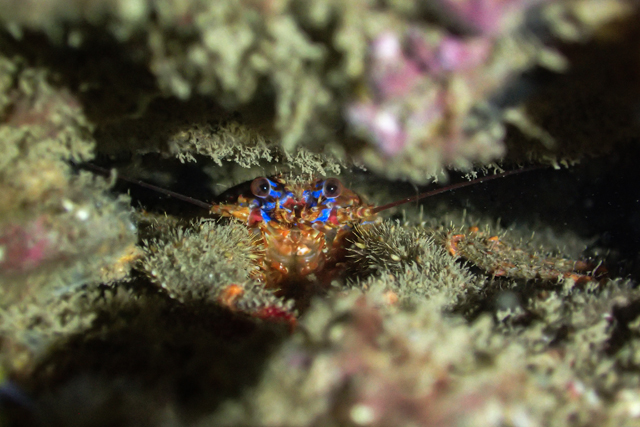 Peter Rowlands: “I think this is a lovely shot on several levels and the fact that it’s taken with a compact almost is irrelevant because a more capable camera system would have taken the same image. It’s bang, straight in the eye and it’s a cute subject. It’s also the three surrounding out of focus sections, which don’t distract, but contribute positively. A lovely shot.”

Tony commented: “I did set out to take a photo of a squat lobster as they are one of my favourite subjects due to the electric blue colours they have. This one sat deep inside its crevice giving it confidence knowing it was safe which made for a comfortable photo shoot. It just sat there peering at the lens.” Peter Rowlands: “The backscatter is a little more intrusive on this image, but for me, the standout thing is not the subject itself, but the little sparkle of light in the background, which lifts it from being a normal portrait of a cuttlefish, and that was what stood out. You have to attract the eye of a judge and hold his or her attention, and I kept coming back to this one simply because it was just slightly differently lit.” 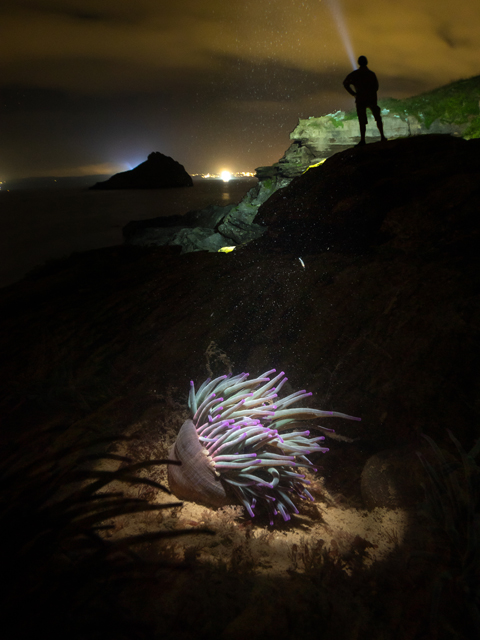 Peter Rowlands: “This image is so obviously different. It is both clever and visually appealing. This is a classic example of a good competitive picture because it grabs your attention, it gives you lots to look at. The lighting is from several sources, and the initial impact is very strong indeed, but you can look at it time and time again. It’s a very, very well executed shot, especially in the conditions there have been today. It’s a cracker!”

Dan commented: “Given that prevailing conditions in the Bay were less than optimal, I knew I had to come up with something different. Recent years have seen well executed “in-camera double-exposure” images do very well in UK competitions, so I thought it was high-time I gave it a go.

The lower half of this image was shot on a night-dive at Babbacombe. I needed a strong subject in this section of the composite for it to work and the anemone was the perfect target.

The top half of the image was taken at my favourite rock-pooling location: Hopes Nose. I was hoping for a Perseid meteor trail, but the clouds came over just as I arrived… at 1am. This meant I had to improvise. I made use of the topography, with multiple torches, to capture the star-gazer portion of the eventual photo.” 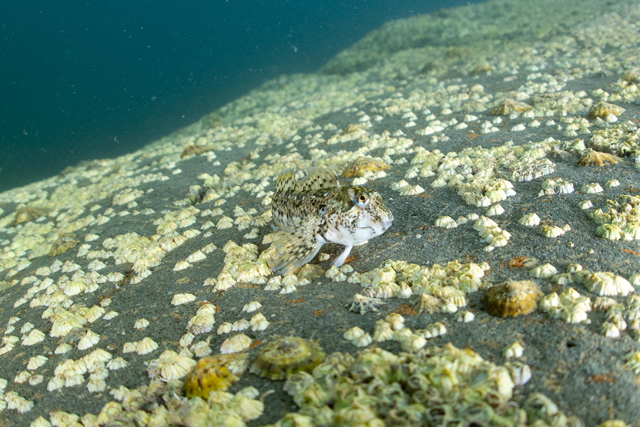 Peter Rowlands: “I like this particular shot. You could say is that the main subject is too small in the frame and not particularly contrasty, but that, in this particular shot, is part of it. The way the image goes from bottom right to top left, with nice open water in the background. And it’s just a nice image which is quite subtle. Sometimes, subtlety is overlooked in the judging process, but this was an appealing shot.” Simon commented: “After a couple of hours it became clear that the dreadful visibility was only going to allow wide-angle shots, close to the surface. So I made my way to a rocky area towards the end of Babbacombe Bay. The only subject I could guarantee here was the Common Blenny or Shanny. The tide was now falling and they had become very nervous, capturing an image of even one became a challenge. Eventually I managed one in-focus image, taken at a slightly upward angle giving an impression of the surface above.” Peter Rowlands: “This was a very different shot because in the conditions that there were today, here we have a full diver in the frame with space around them. It’s a nice clean shot with the additional attractive red boulders in the composition – it really stood out.”

Dave commented: “My wide-angle shot was taken at Babbacombe.  The underwater visibility was not good, but we went snorkelling near the harbour where the conditions had improved a little. The image of Lynda was taken with a fisheye wide-angle lens and I particularly liked the colour of the rocks which stood out.” Peter Rowlands: “It’s a lovely shot and it jumped out, simply because it’s got a beautifully curved framing piece on the left and the out of focus bokeh doesn’t distract but contributes. There’s a lovely starburst ping with the little tubeworm, almost like a spot of sunlight. The eye contact is great and it’s a very appealing shot of a well photographed subject.” Peter Rowlands: “It’s a lovely shot technically and part of the attraction is the crispness and contrasting clarity of the image. The background is not complementary, it’s more confusing, but it’s not confusing enough to distract from the eyes. Technically, it’s a superb portrait.”

Dan commented: “At this time of year we often see a drop-off in subjects during the day-time, but night-dives tend to be much more productive. The 1-2m vis (that’s being generous) meant I knew my best chance of a ‘clean’ shot was up in the shallows, at high tide, just after the competition started (10pm).

Knowing what the visibility was like, having a ‘clean’ image (i.e. no back-scatter) was going to help any submitted image stand out in this competition (there-in lies the beauty of this Splash-In: it’s the same conditions for all competitors), and I got really lucky with this shrimp, in only about a foot of water, who stayed still enough for me to grab a few frames.” 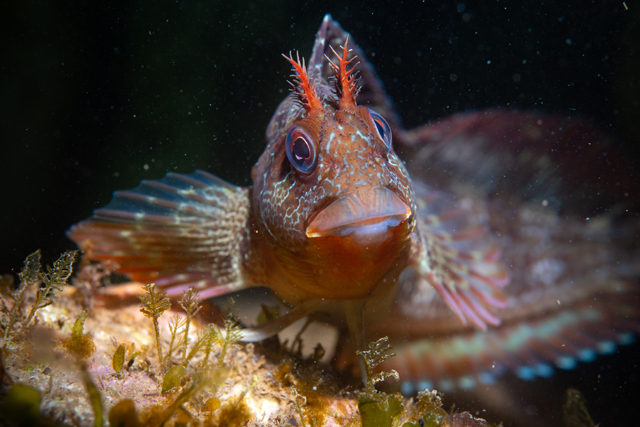 Peter Rowlands: “So often photographers go in for the classic big lips and big eyes, and it has done very well for decades in British underwater photography. It’s a very charismatic subject. This is a particularly nice shot because the photographer has come back a bit and has captured much more of the fish, the splay to the right, the balance of the fins to the left. It’s a nice portrait, an unusually nice portrait.”

Simon commented: “After a couple of hours underwater it became clear that the dreadful visibility was only going to allow wide-angle shots, with any sort of clarity, close to the surface. With this in mind, I made my way to a rocky area, clear of weed, towards one end of Babbacombe Bay.  The only subject I could guarantee at this location was the Common Blenny or Shanny. The tide was now falling and the Shannies had become very nervous, capturing an image of even one became a challenge. Eventually I managed one in-focus image, taken at a slightly upward angle giving an impression of the surface above.” Peter Rowlands: “This was visually different from the other images that were entered today. It’s a very, very strong photograph.” Tony commented: “I was very surprised to win this as there were some great images entered!  I had the idea in mind to try and get a scallop open if I came across one. I settled down and got the camera and light ready waiting patiently for it to get comfortable and open up… they open up wide just before shooting off leaving a murky trail. It took me 3 attempts and about 20 minutes to get the shot.” 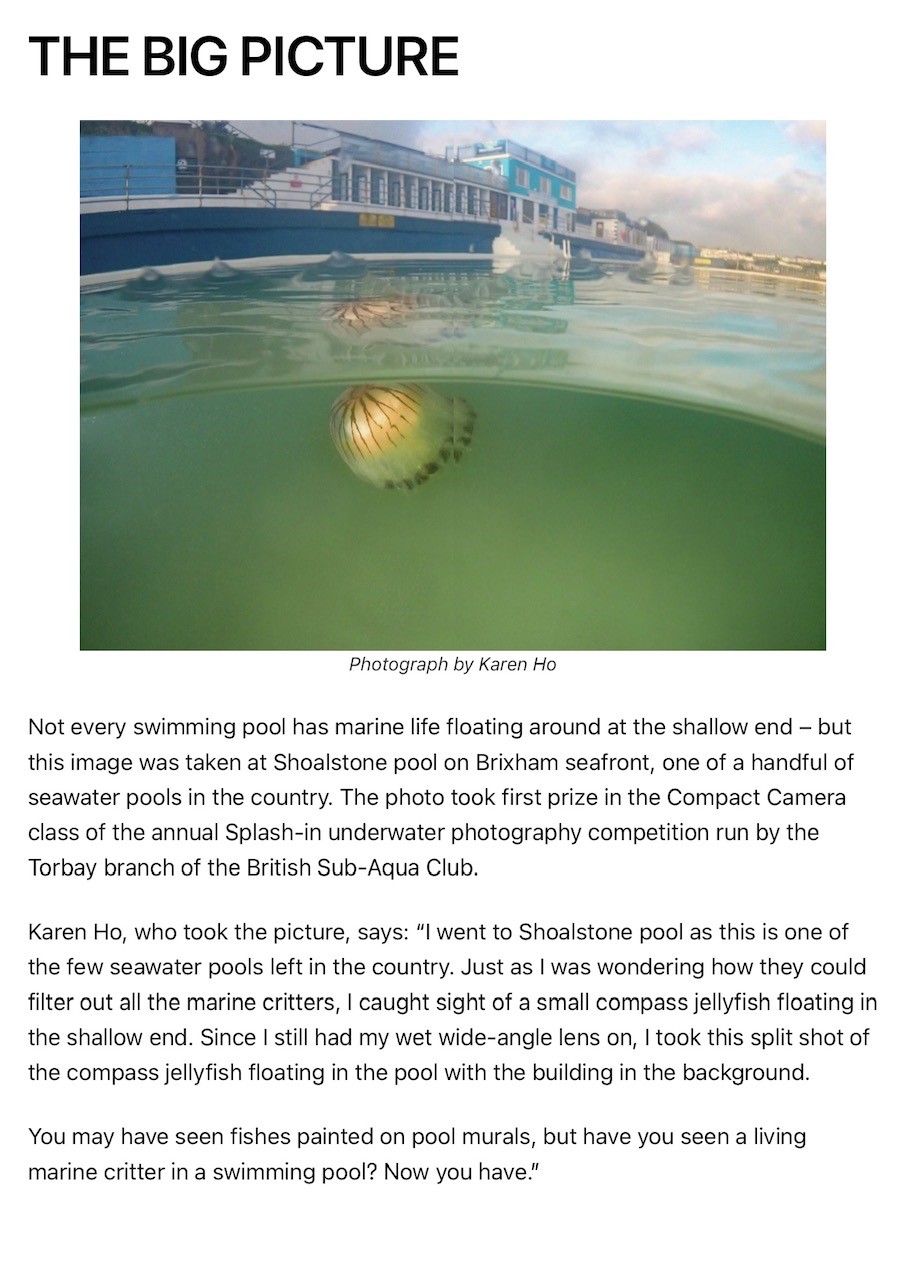 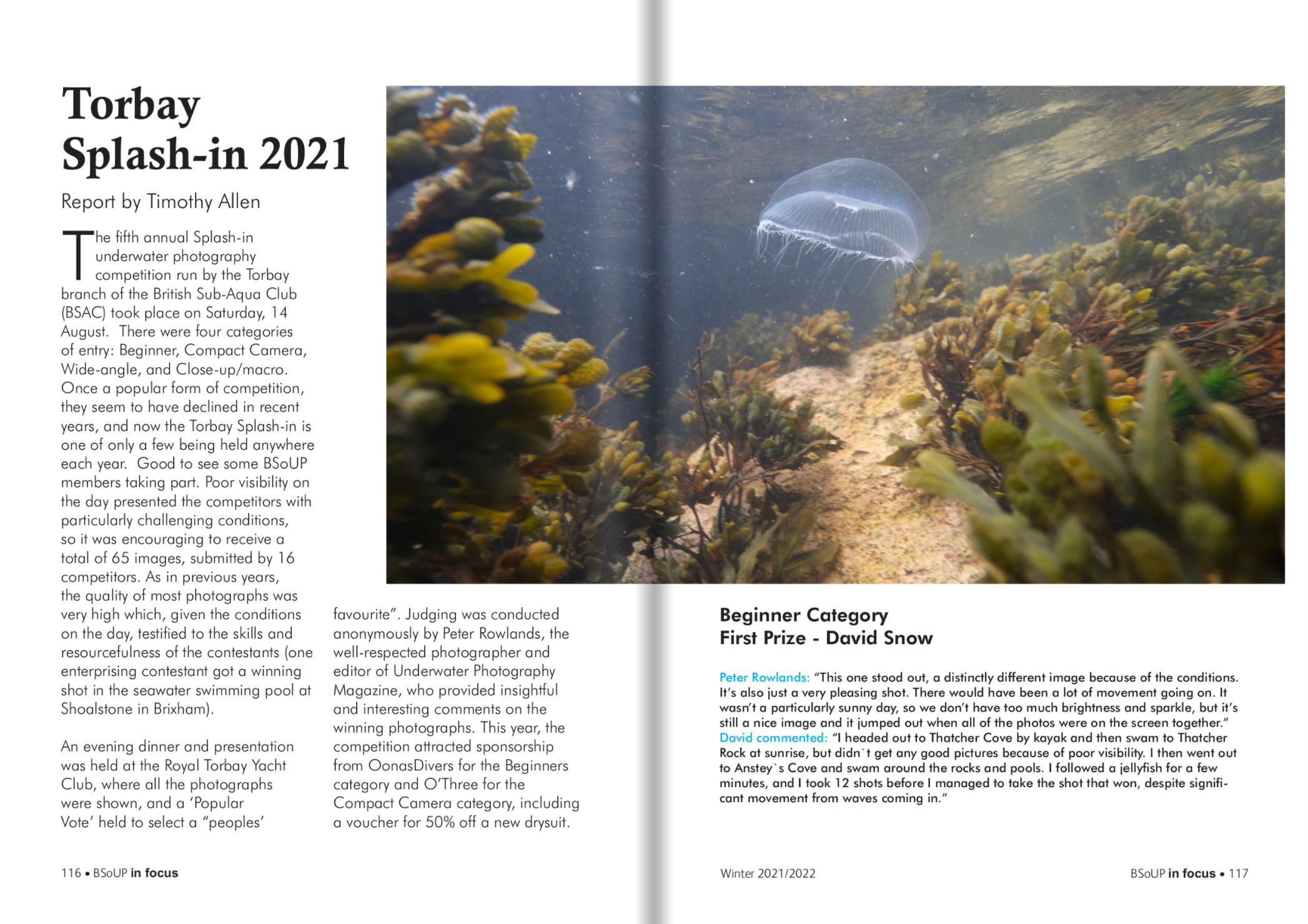