Despite numerous setbacks (Covid-19, Rule-of-Six, poor sea conditions) we managed to attract 19 competitor registrations, leading to 12 competitors submitting a total of 49 photographs. As in previous years, the quality of photographs continues to be high, which given the poor conditions on the day, is a testament to the skills and resourcefulness of the contestants. As usual, we had a booth set up on Beacon Quay for the contestants to meet us and hand in their photo submissions. It also aims to raise the profile of the club for local visitors and in the past, it has attracted new members.

We are indebted to Peter Rowlands, our esteemed judge, who provided insightful and interesting comments on the winning photographs, and all done in a supremely timely manner on the night, even though he was working remotely. The Evening Event was attended by less people than usual (mostly due to the impact of Covid-19 restrictions) and unfortunately only one of the winners was present to receive their prize on the night. However, the dinner and presentations were, I hope, appreciated by the 20 or so people who did attend. Thanks to the Royal Torbay Yacht Club who provided an excellent venue and meal on the night.

This year, we were delighted to accept sponsorship for two of the prizes: Christopher Ward provided a valuable diving watch for the winner of the Popular Vote, and O'Three provided the First Prize for the Beginner Category (including a voucher for 50% off a new drysuit).

This was our fourth annual Splash-in and, despite the setbacks, it managed to achieve some success that will hopefully further establish the event at a national level in the world of underwater photography.

Here is Peter Rowland's introduction to the awards presentation, along with his comments on the winning photographs (you can also view larger versions of the photos in our Galleries pages):

"Good evening, ladies and gentlemen and thank you for inviting me once again to judge the images from this year’s Torbay Splash In.

For obvious reasons this year’s earlier event had to be postponed and rescheduled for today. This later date ran the risk of a weather gamble and unfortunately the conditions on the day were not, shall we say, sparkling :-)

A shame it may be, but that is the essence, and also the attraction, of a Splash In. You are all, so to speak, in the same boat. With good weather it is easier, but when the conditions and vizibilty are significantly restricted it becomes a test of your photographic mettle, so I would first of all like to congratulate each and every one of the entrants on your day’s work.

Competitions are cruel for the entrant but also the judge. Tonight, for the few, I will be the good guy, but for the majority my judgement will be questionable at best and “he definitely shouldn’t be invited back next year!”. Such is the nature of competitions. On the positive side they do provide a very valuable opportunity to see other’s work, and to learn how and why they succeeded.

So without further ado, here are my winning images in reverse order:" 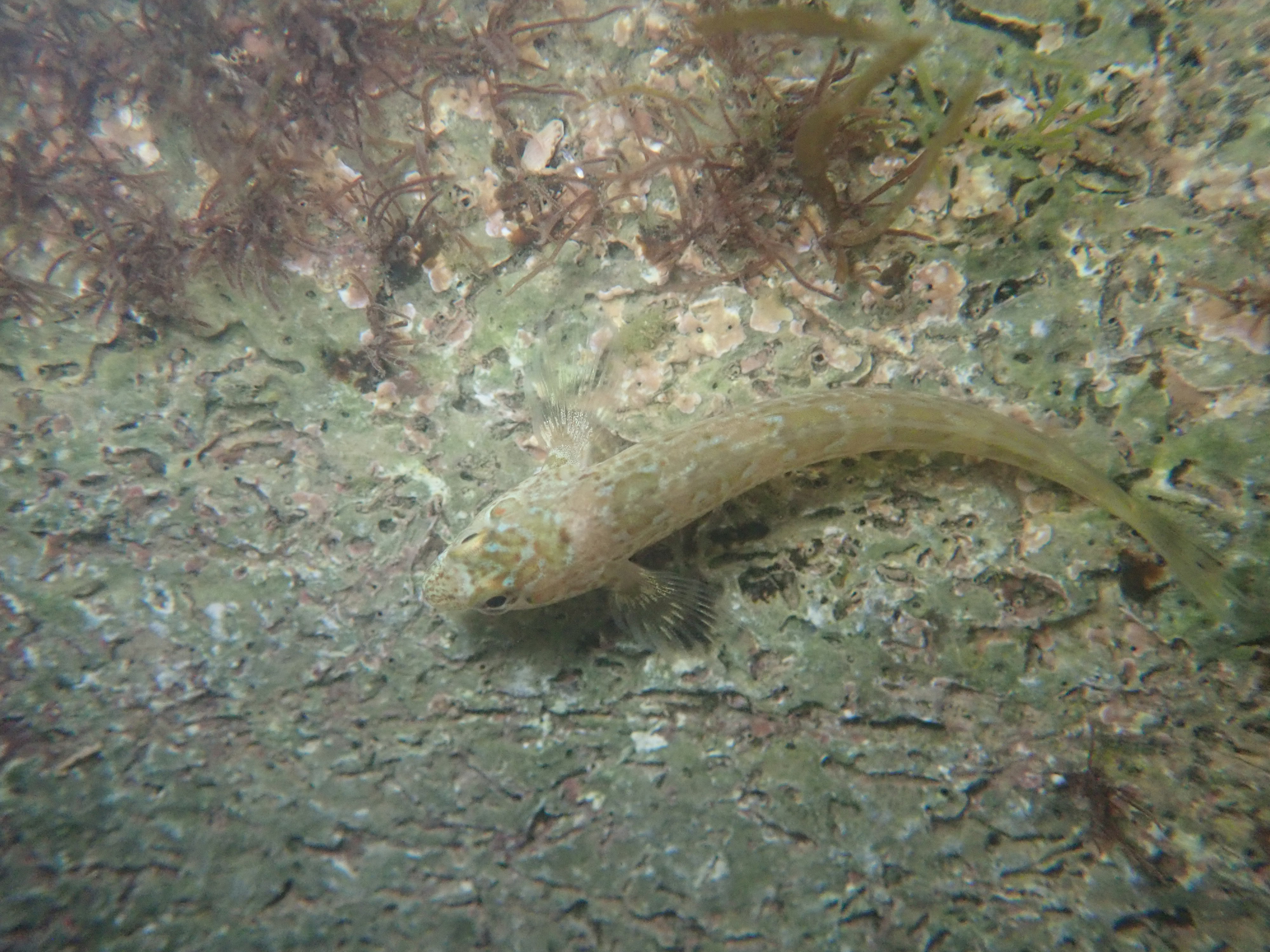 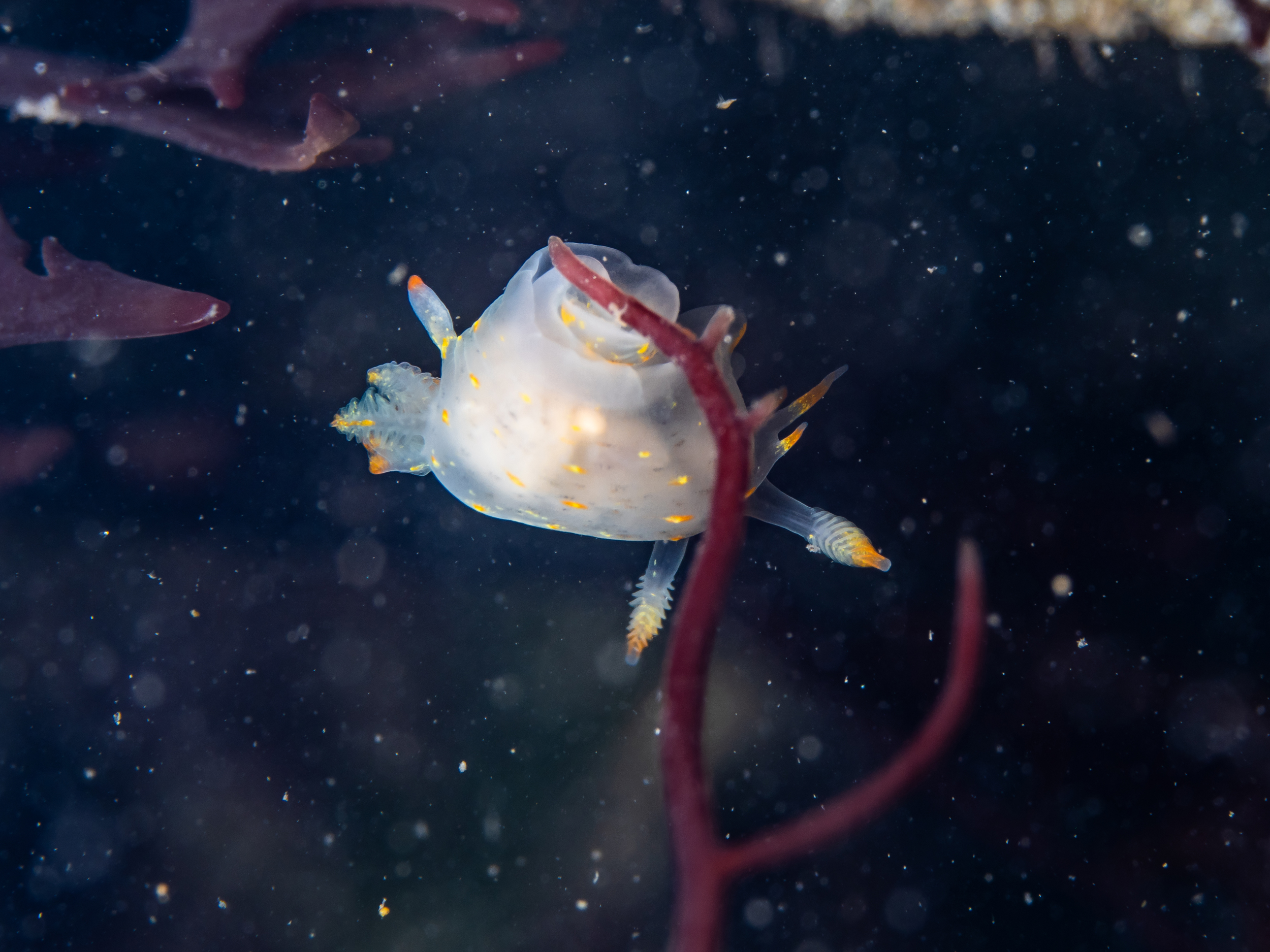 Peter Rowland: This is a graphically simple image with the backscatter, for once, contributing positively to create an out of this world feeling. 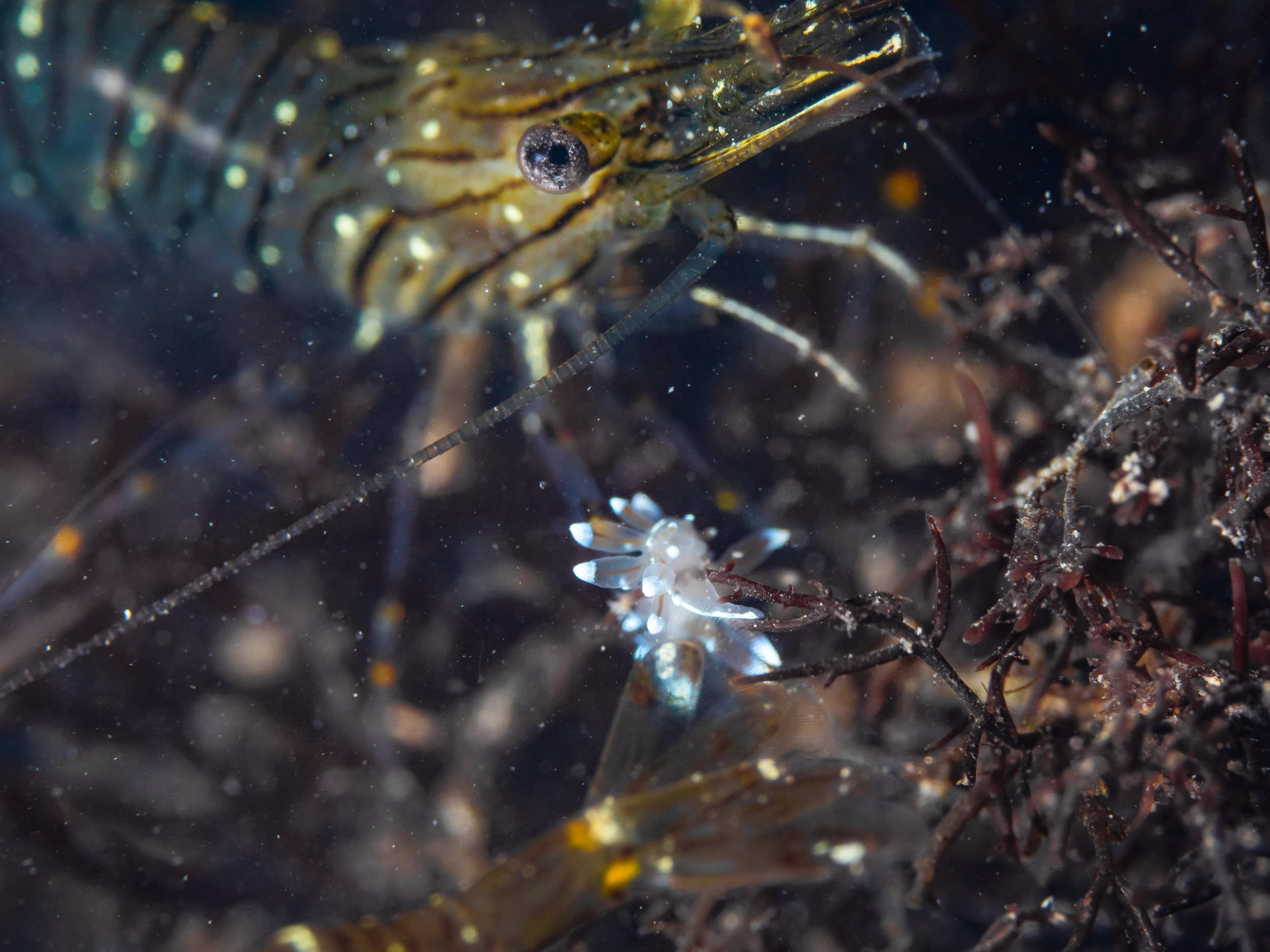 Peter Rowland: A very strong image indeed for this category. The great eye contact doesn’t overpower the obvious subject and the use of foreground and background creates depth. Congratulations.

“Absolutely thrilled to have placed second and first in the beginners category of this year’s Torbay BSAC Splash-in, although the weather was not brilliant, but spending hours sat in a rock pool until 3am paid off in the end. This was the first time I’d seen this tiny Nudibranch and getting it in focus when the prawn was in the background proved quite a challenge as the tide started rising and the coffee started to wear off. A big thank you to Torbay BSAC and O’Three drysuits for the prizes, and congratulations to all the other competitors for some brilliant images. Can’t wait for next year!” 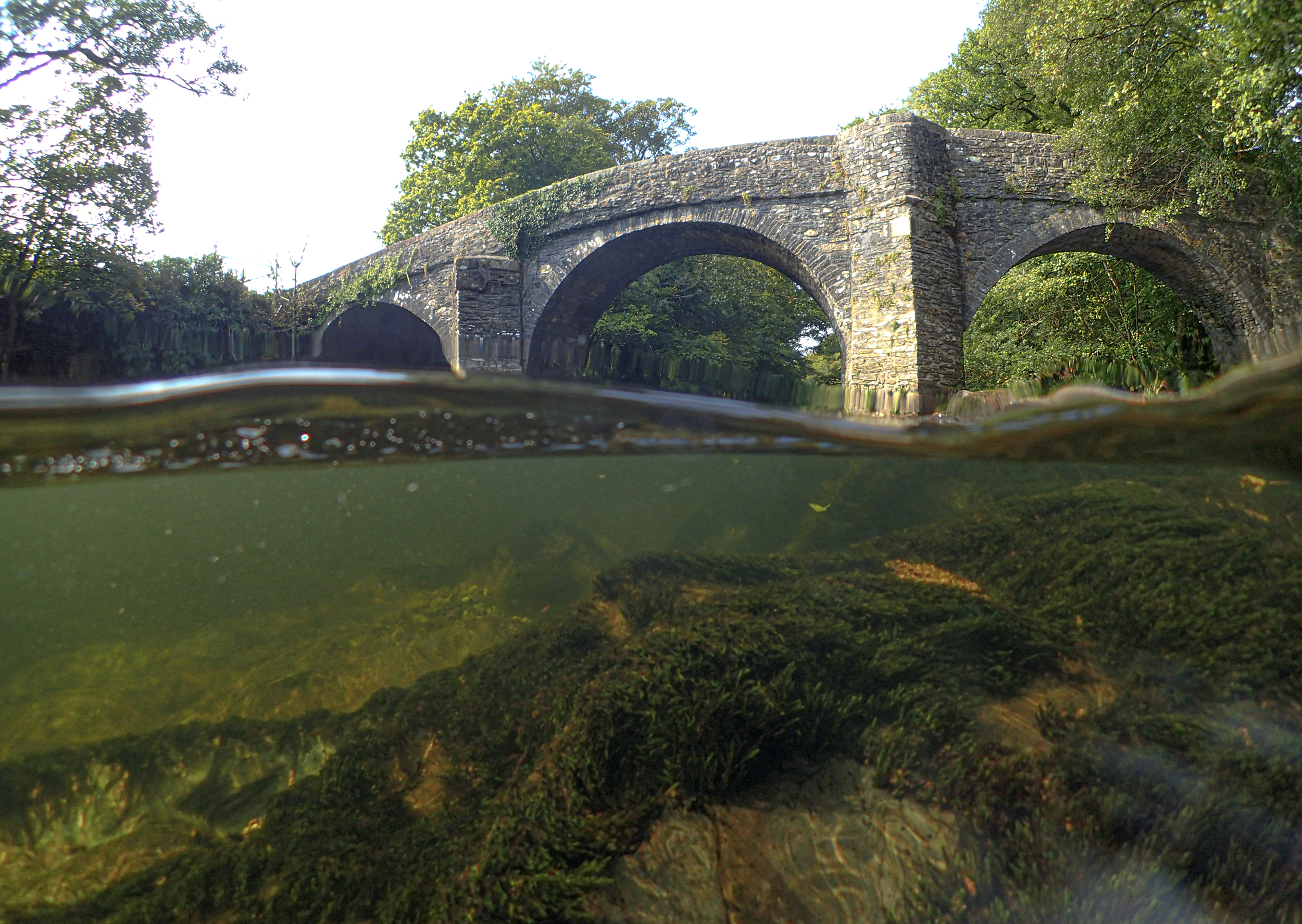 Peter Rowland: A very effective and well chosen technique which suits and lifts this subject so well. 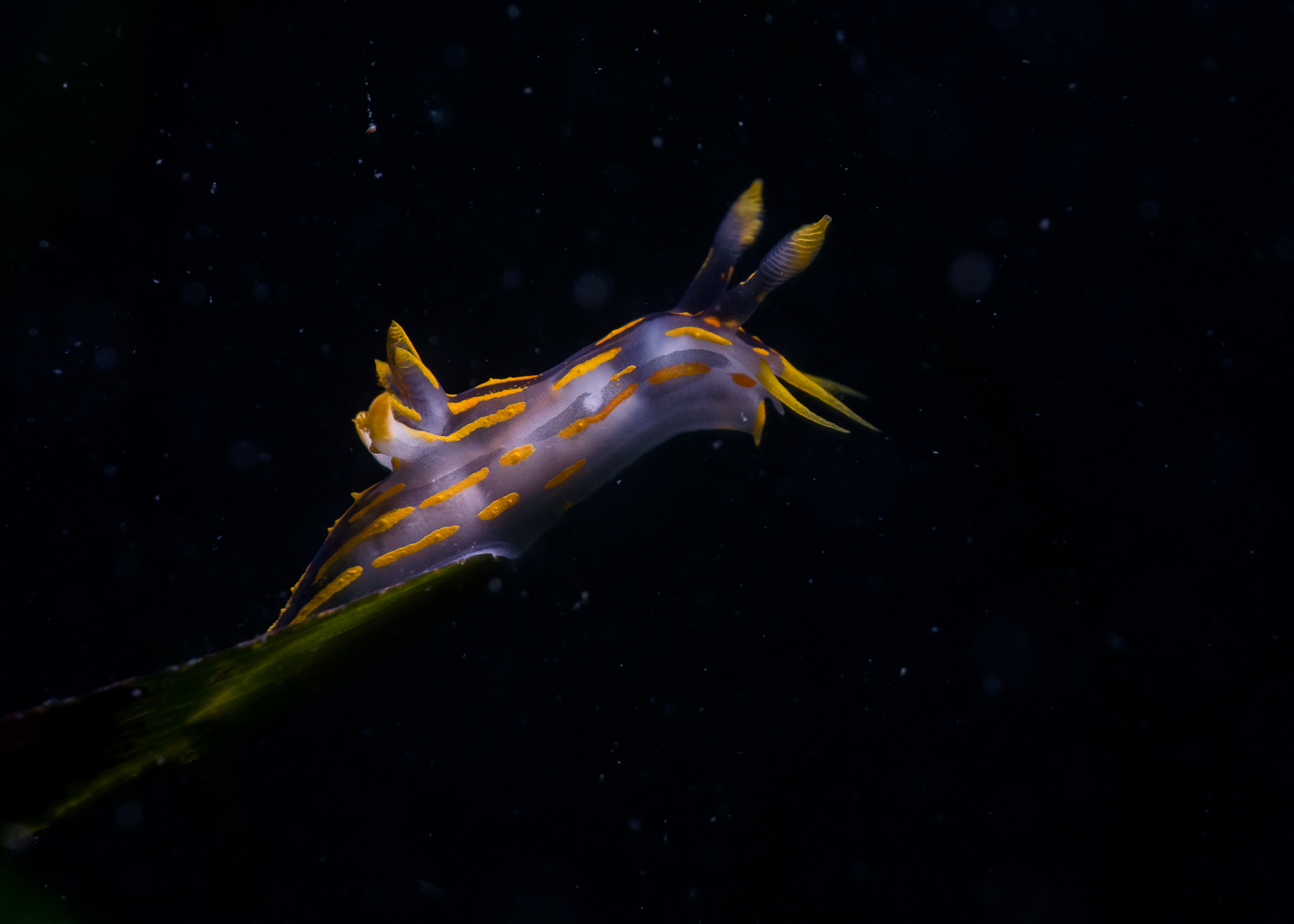 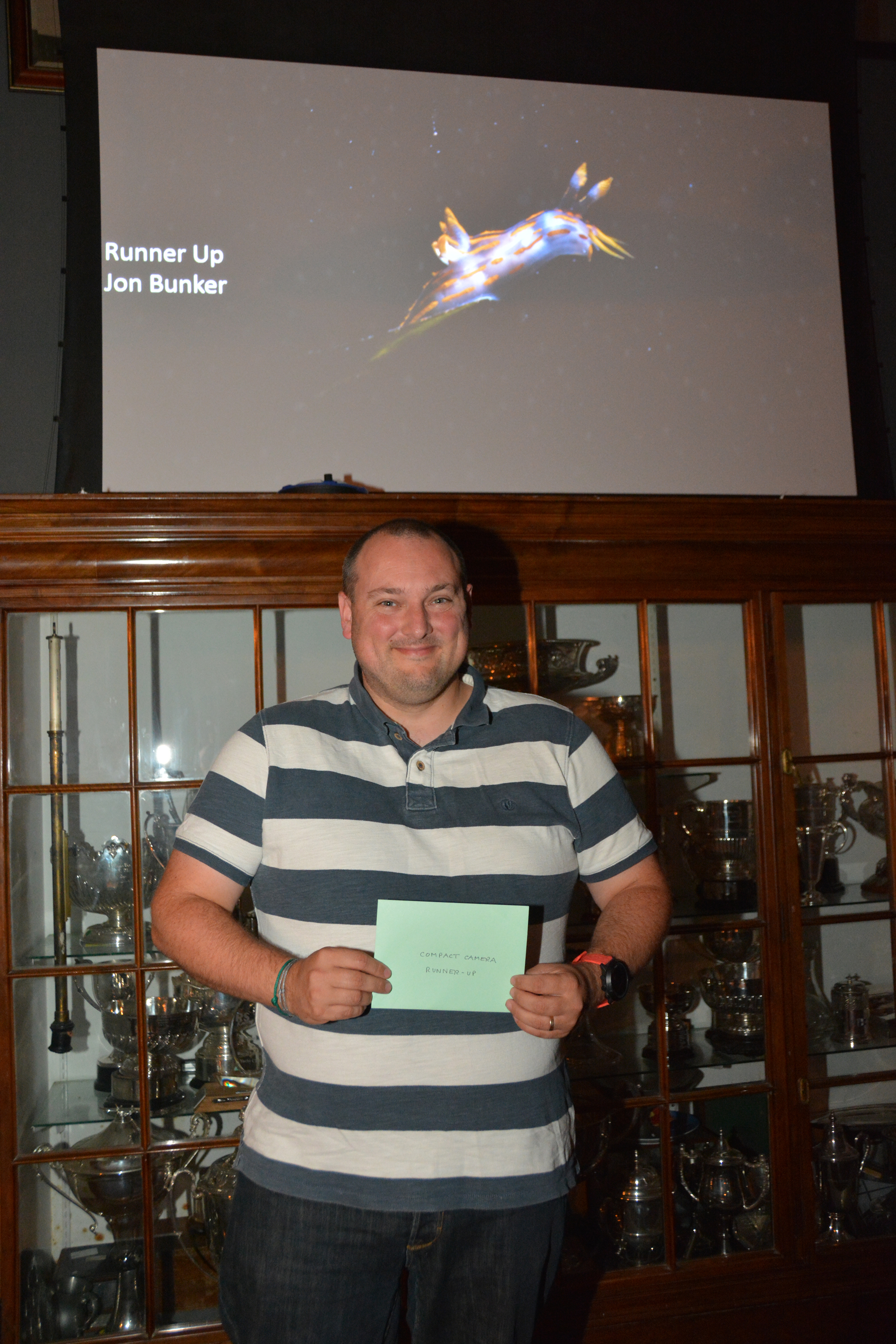 "My nudibranch shot was taken in a rather dreary Castle Cove, as my original target of Chesil was being chewed up that morning by a big springs and surge. It was mucky (as expected) close in and further out in the harbour, but inside the 'reef' wall at the cove there was a band of 1-2m vis, making hunting for nudibranchs and macro life possible. The shot was taken on a mark 1 Sony rx100, with an inon s-2000 strobe and nauticam cmc-1 wet lens. f8, 1/160, iso 200. There were several individuals in an area about 5 metres around, hunting down the last uneaten patches of bryozoans on the seagrass. This particular individual was hopping quite quickly (for a sea slug) from blade to blade, and I managed to get a shot of him questing for his next meal on the tip of one bit of grass". Peter Rowland: This is such a strong image compositionally on several levels. Triangles, diagonals and perfect, yet subtle eye contact. Excellent stuff.

"I was actually looking for a very clear catshark egg which had been spotted in Plymouth and I thought would make a good subject. Unfortunately I couldn't find it but while looking I came across 4 lobsters, one of which seemed to stand out due to the way it was positioned and the really nice set of claws. I have recently changed over to a Canon G9X which I use in conjunction with a single Sea and Sea YSD1 strobe". 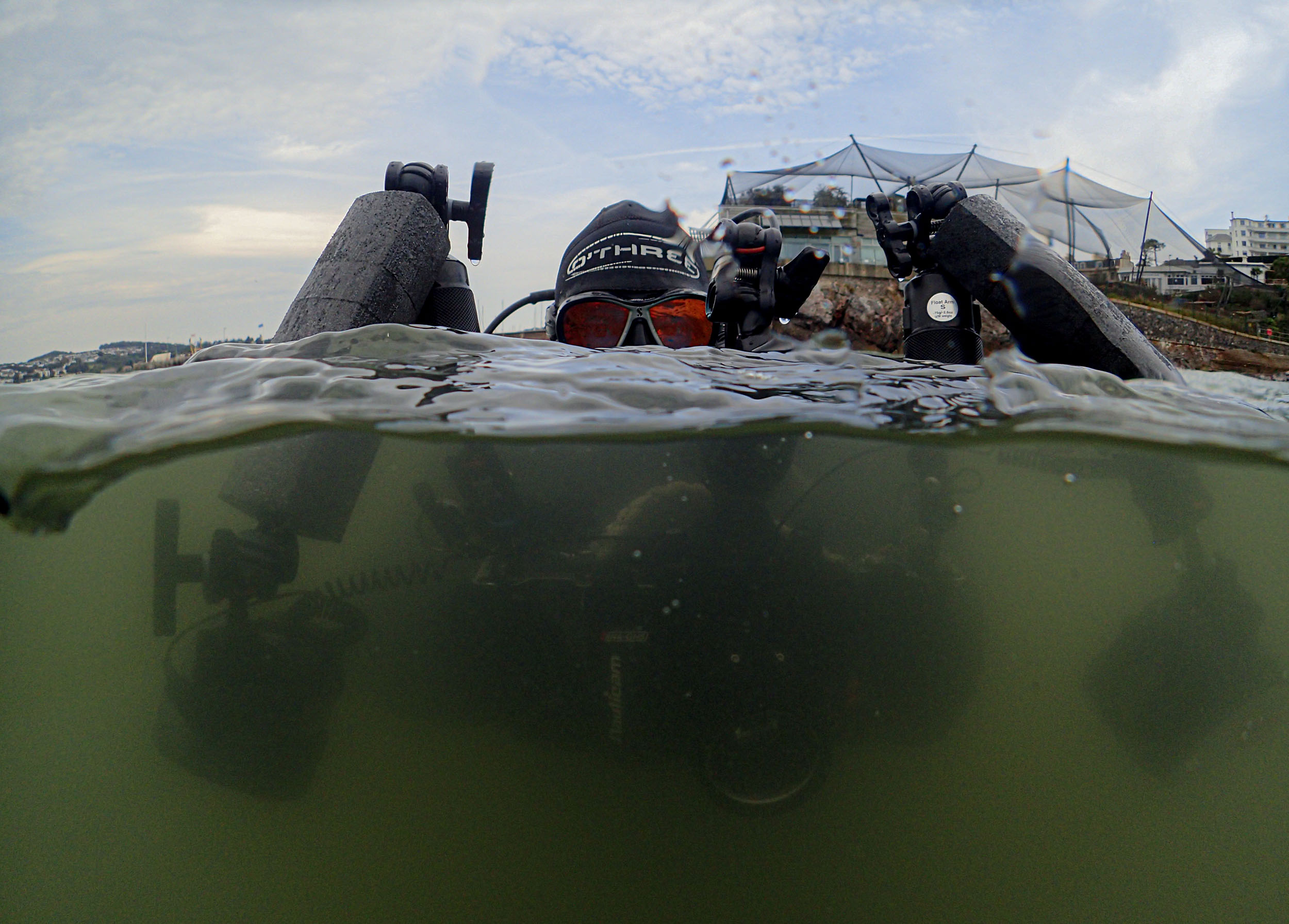 Peter Rowland: I had to highlight this as it shows just how difficult the conditions obviously were! Peter Rowland: This is a very clean, well lit image with a strong background both visually and physically.

“This Pink Sea Fan was very handily framed by the structure known by some as the ‘The Crown Jewels’. Despite the overcast weather, there was still enough light to cast a lovely green colour in the water, which sets off the striking pink of the Sea Fan. I used two strobes spaced very far apart to reduce backscatter in the image.” 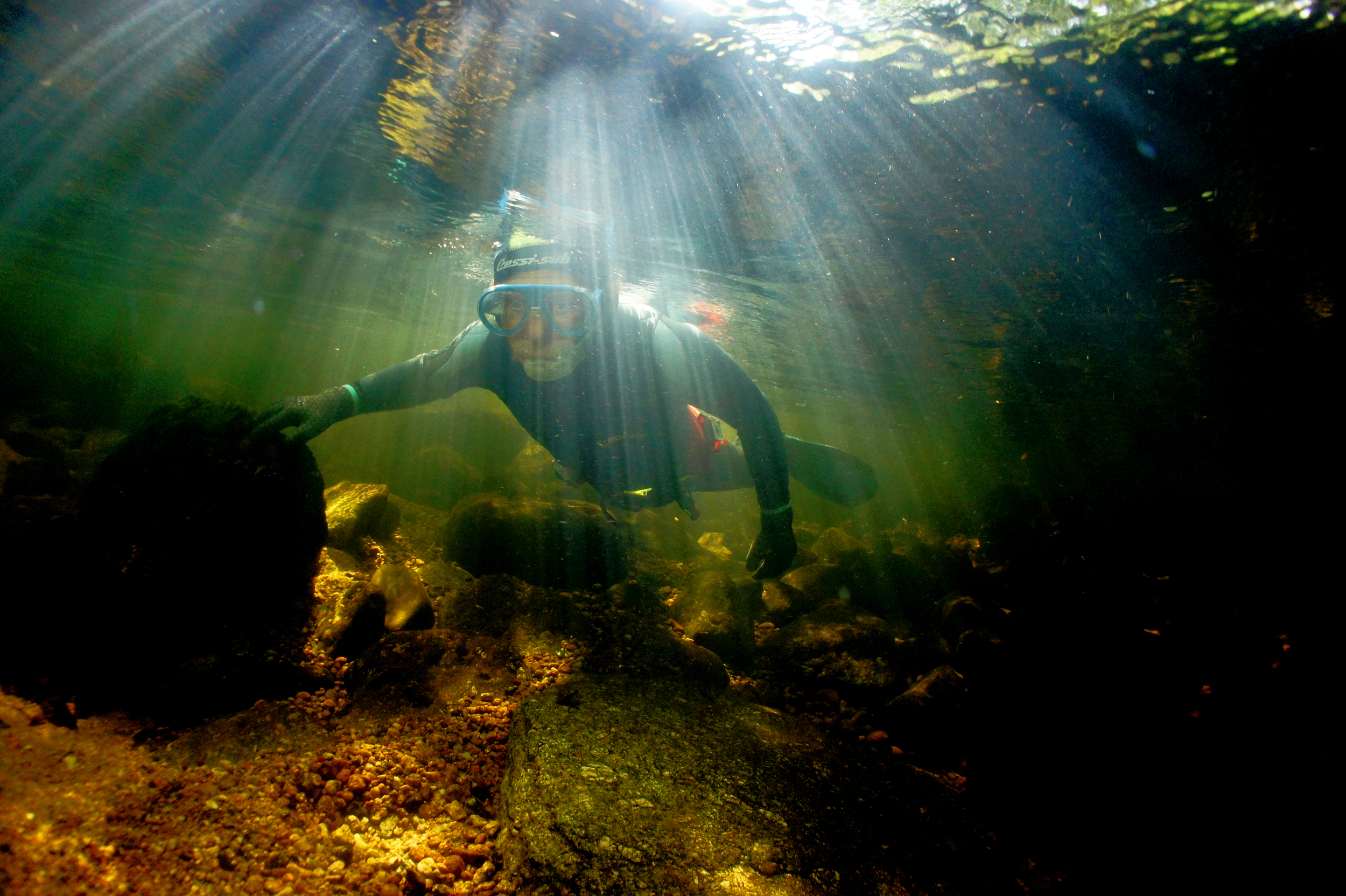 Peter Rowland: This stood out visually with the sun’s rays and is a good example of a well chosen venue and such a difficult day. Peter Rowland: Glorious colours from a grey day. Such delicacy. “On the same structure (as in my wide angle shot) there are also many Pink Sea Fans. I've always wanted to shoot a classic image that shows a resident Sea Fan Nudibranch, with eggs, on its host. It took a while to find, but I was delighted to find just such a composition! I used two strobes pushed forward to give strong, even lighting to the scene.” Peter Rowland: A celebratory image of an iconic British subject. Perfectly composed and exposed, the black background would make the perfect space for a magazine front cover logo :-)

“I was lucky to be able to find a last-minute space on a boat from Plymouth going to the Breakwater Fort. There are lots of metal structures there, and one in particular is known for its Jewel Anemones. The visibility was 3-4m and I was lucky to find one anemone that was standing proud. I chose to use a single strobe with snoot to help reduce the backscatter in the image.” 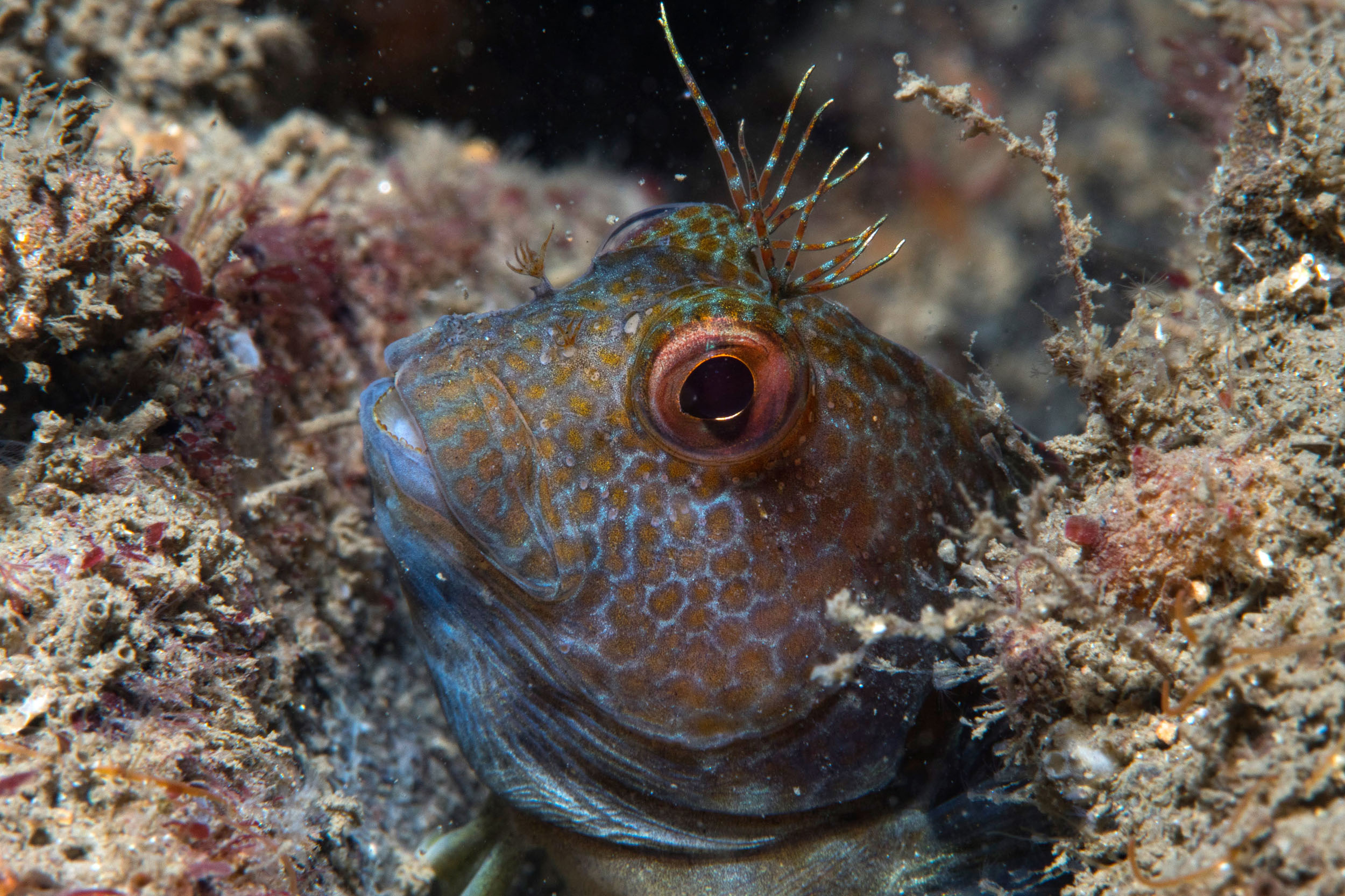 "I decided to dive Easter Kings reef in Plymouth.  Big spring tides over the competition weekend meant I had to dive at high water and even then, there was little or no slack water. Visibility was not ideal, 2-3m at best and lots of sediment in the water...never great for photography! I had gone prepared to shoot blennies and jewel anemones... the only two species I could guarantee at this site at this time of year. The blennies were generally very nervous of divers, more than normal, which made it hard to approach them. I used an 85mm macro lens which allows me to capture lots of detail without getting too close.  But the further you are away from the subject in dirty water the harder lighting the subject becomes. I decided to submit this shot of the variable or ringneck blenny as they were relatively rare until a couple of years ago, being more of a Mediterranean species. Despite becoming more common their colours and facial expressions still fascinate me".

The competition attracted some attention from the press, both local and national. 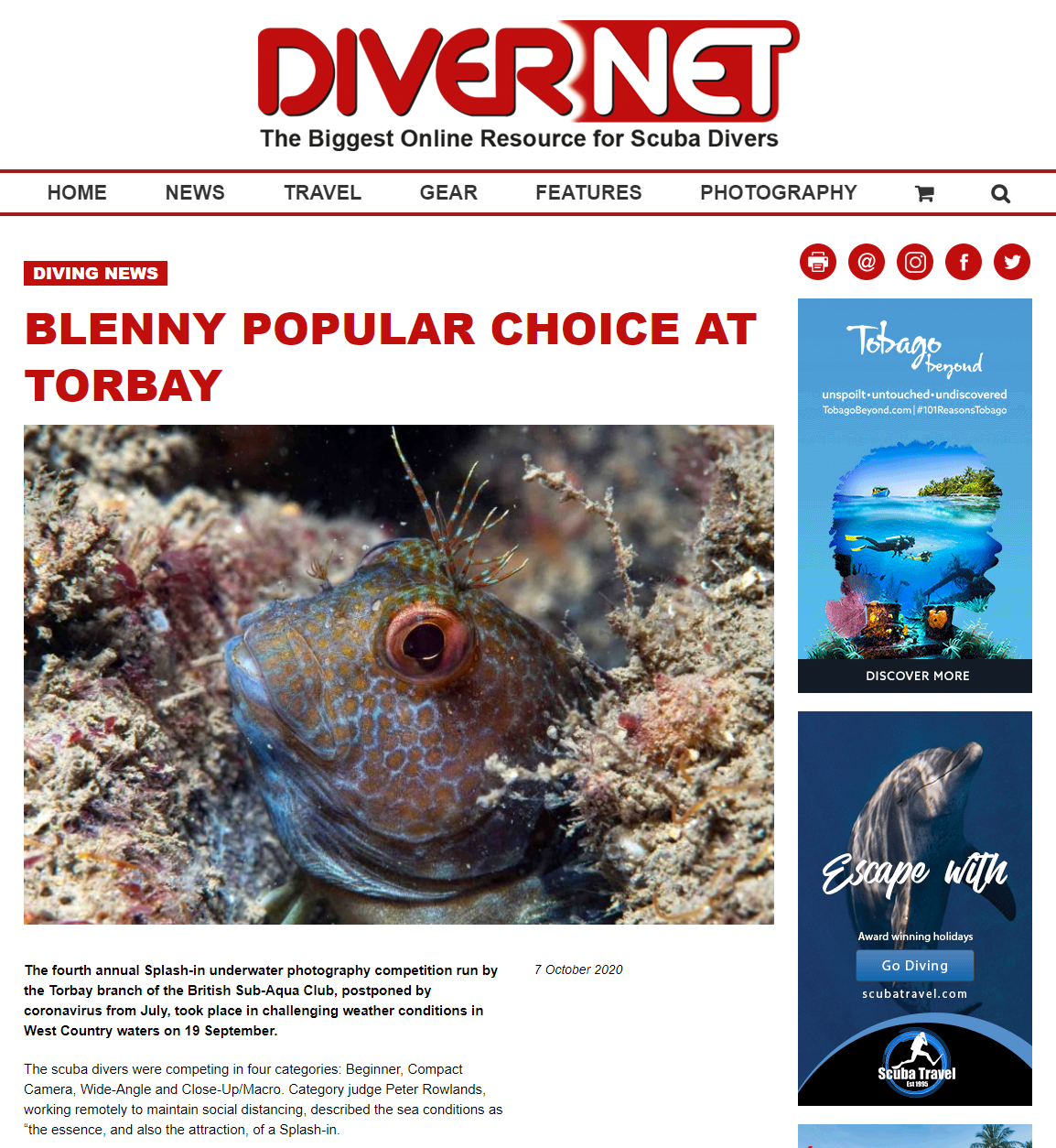